This is an overview of the basics of Natural Language Processing, which basically consists of combining machine learning techniques with text, and using math and statistics to get that text in a format that the machine learning algorithms can understand!

We'll be using a dataset from the UCI datasets!

The file we are using contains a collection of more than 5 thousand SMS phone messages.

Let's go ahead and use rstrip() plus a list comprehension to get a list of all the lines of text messages:

A collection of texts is also sometimes called "corpus". Let's print the first ten messages and number them using enumerate:

Due to the spacing we can tell that this is a TSV ("tab separated values") file, where the first column is a label saying whether the given message is a normal message (commonly known as "ham") or "spam".

The second column is the message itself. (Note our numbers aren't part of the file, they are just from the enumerate call).

Using these labeled ham and spam examples, we'll train a machine learning model to learn to discriminate between ham/spam automatically. Then, with a trained model, we'll be able to classify arbitrary unlabeled messages as ham or spam.

We'll use read_csv and make note of the sep argument, we can also specify the desired column names by passing in a list of names.

Let's check out some of the stats with some plots and the built-in methods in pandas!

Let's use groupby to use describe by label, this way we can begin to think about the features that separate ham and spam!

As we continue our analysis we want to start thinking about the features we are going to be using. This goes along with the general idea of feature engineering.

The better your domain knowledge on the data, the better your ability to engineer more features from it. Feature engineering is a very large part of spam detection in general. I encourage you to read up on the topic!

Let's visualize this! Let's do the imports:

Play around with the bin size! Looks like text length may be a good feature to think about! Let's try to explain why the x-axis goes all the way to 1000ish, this must mean that there is some really long message!

Woah! 910 characters, let's use masking to find this message:

Looks like we have some sort of Romeo sending texts! But let's focus back on the idea of trying to see if message length is a distinguishing feature between ham and spam:

Very interesting! Through just basic EDA we've been able to discover a trend that spam messages tend to have more characters.

Now let's begin to process the data so we can eventually use it with SciKit Learn!

Our main issue with our data is that it is all in text format (strings). The classification algorithms that we've learned about so far will need some sort of numerical feature vector in order to perform the classification task. There are actually many methods to convert a corpus to a vector format. The simplest is the the bag-of-words approach, where each unique word in a text will be represented by one number.

In this section we'll convert the raw messages (sequence of characters) into vectors (sequences of numbers).

As a first step, let's write a function that will split a message into its individual words and return a list. We'll also remove very common words, ('the', 'a', etc..). To do this we will take advantage of the NLTK library. It's pretty much the standard library in Python for processing text and has a lot of useful features. We'll only use some of the basic ones here.

Let's create a function that will process the string in the message column, then we can just use apply() in pandas do process all the text in the DataFrame.

First removing punctuation. We can just take advantage of Python's built-in string library to get a quick list of all the possible punctuation:

Now let's see how to remove stopwords. We can impot a list of english stopwords from NLTK (check the documentation for more languages and info).

Put text processes together in a function to apply it to our DataFrame later on:

Now let's "tokenize" these messages. Tokenization is just the term used to describe the process of converting the normal text strings in to a list of tokens (words that we actually want).

There are a lot of ways to continue normalizing this text. Such as Stemming or distinguishing by part of speech.

NLTK has lots of built-in tools and great documentation on a lot of these methods. Sometimes they don't work well for text-messages due to the way a lot of people tend to use abbreviations or shorthand, For example:

Some text normalization methods will have trouble with this type of shorthand and so I'll leave you to explore those more advanced methods through the NLTK book online.

For now we will just focus on using what we have to convert our list of words to an actual vector that SciKit-Learn can use.

Currently, we have the messages as lists of tokens (also known as lemmas) and now we need to convert each of those messages into a vector the SciKit Learn's algorithm models can work with.

Now we'll convert each message, represented as a list of tokens (lemmas) above, into a vector that machine learning models can understand.

We'll do that in three steps using the bag-of-words model:

Each vector will have as many dimensions as there are unique words in the SMS corpus. We will first use SciKit Learn's CountVectorizer. This model will convert a collection of text documents to a matrix of token counts.

We can imagine this as a 2-Dimensional matrix. Where the 1-dimension is the entire vocabulary (1 row per word) and the other dimension are the actual documents, in this case a column per text message.

Since there are so many messages, we can expect a lot of zero counts for the presence of that word in that document. Because of this, SciKit Learn will output a Sparse Matrix.

There are a lot of arguments and parameters that can be passed to the CountVectorizer. In this case we will just specify the analyzer to be our own previously defined function:

Let's take one text message and get its bag-of-words counts as a vector, putting to use our new bow_transformer:

This means that there are seven unique words in message number 20 (after removing common stop words). One appears twice, the rest only once. Let's go ahead and check and confirm which one is appearing twice:

Now we can use .transform on our Bag-of-Words (bow) transformed object and transform the entire DataFrame of messages. Let's go ahead and check out how the bag-of-words counts for the entire SMS corpus is a large, sparse matrix:

After the counting, the term weighting and normalization can be done with TF-IDF, using scikit-learn's TfidfTransformer.

TF-IDF stands for term frequency-inverse document frequency, and the tf-idf weight is a weight often used in information retrieval and text mining. This weight is a statistical measure used to evaluate how important a word is to a document in a collection or corpus. The importance increases proportionally to the number of times a word appears in the document but is offset by the frequency of the word in the corpus. Variations of the tf-idf weighting scheme are often used by search engines as a central tool in scoring and ranking a document's relevance given a user query.

TF: Term Frequency, which measures how frequently a term occurs in a document. Since every document is different in length, it is possible that a term would appear much more times in long documents than shorter ones. Thus, the term frequency is often divided by the document length (aka. the total number of terms in the document) as a way of normalization:

TF(t) = (Number of times term t appears in a document) / (Total number of terms in the document).

IDF: Inverse Document Frequency, which measures how important a term is. While computing TF, all terms are considered equally important. However it is known that certain terms, such as "is", "of", and "that", may appear a lot of times but have little importance. Thus we need to weigh down the frequent terms while scale up the rare ones, by computing the following:

See below for a simple example.

Let's go ahead and see how we can do this in SciKit Learn:

To transform the entire bag-of-words corpus into TF-IDF corpus at once:

There are many ways the data can be preprocessed and vectorized. These steps involve feature engineering and building a "pipeline". I encourage you to check out SciKit Learn's documentation on dealing with text data as well as the expansive collection of available papers and books on the general topic of NLP.

With messages represented as vectors, we can finally train our spam/ham classifier. Now we can actually use almost any sort of classification algorithms. For a variety of reasons, the Naive Bayes classifier algorithm is a good choice.

We'll be using scikit-learn here, choosing the Naive Bayes classifier to start with:

Let's try classifying our single random message and checking how we do:

Fantastic! We've developed a model that can attempt to predict spam vs ham classification!

Now we want to determine how well our model will do overall on the entire dataset. Let's begin by getting all the predictions:

We can use SciKit Learn's built-in classification report, which returns precision, recall, f1-score, and a column for support (meaning how many cases supported that classification). Check out the links for more detailed info on each of these metrics and the figure below: 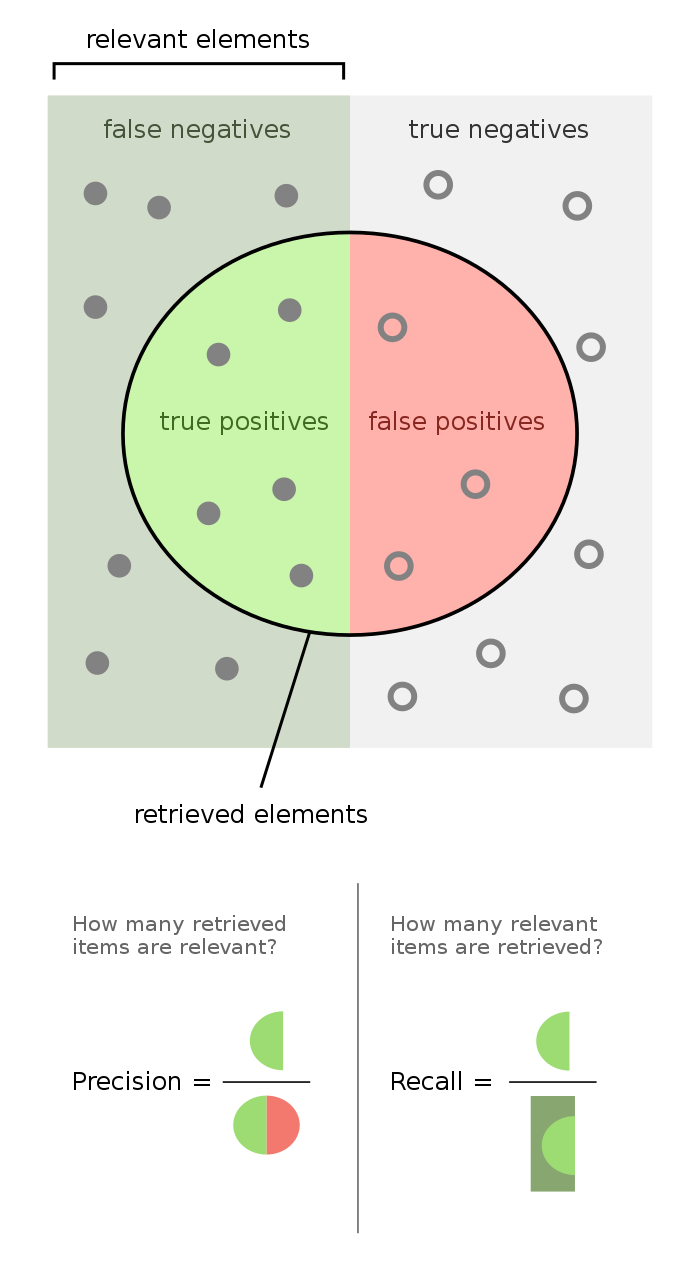 There are quite a few possible metrics for evaluating model performance. Which one is the most important depends on the task and the business effects of decisions based off of the model. For example, the cost of mis-predicting "spam" as "ham" is probably much lower than mis-predicting "ham" as "spam".

Such evaluation tells us nothing about the true predictive power of our model. If we simply remembered each example during training, the accuracy on training data would trivially be 100%, even though we wouldn't be able to classify any new messages.

A proper way is to split the data into a training/test set, where the model only ever sees the training data during its model fitting and parameter tuning. The test data is never used in any way. This is then our final evaluation on test data is representative of true predictive performance.

The test size is 30% of the entire dataset

Let's run our model again and then predict off the test set. We will use SciKit Learn's pipeline capabilities to store a pipeline of workflow. This will allow us to set up all the transformations that we will do to the data for future use. Let's see an example of how it works:

Now we can directly pass message text data and the pipeline will do our pre-processing for us! We can treat it as a model/estimator API:

Now we have a classification report for our model on a true testing set! There is a lot more to Natural Language Processing than what we've covered here, and its vast expanse of topic could fill up several college courses! I encourage you to check out the resources below for more information on NLP!

Check out the links below for more info on Natural Language Processing: